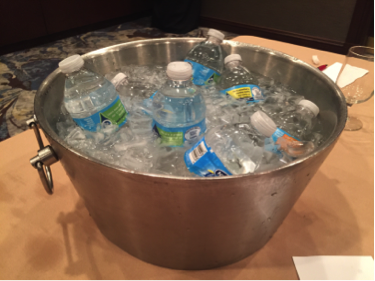 The Greatest Leaders are Extra-Milers

These days, hotel owners routinely supply their guests with hospitalities and amenities that were unheard of 15 years ago. There’s a simple reason for this: competition. They know they have a vanishing inventory. Any room that goes unsold tonight is a sales opportunity that’s lost forever. This means everyone is trying to outdo the competitors. So it follows that I’ve enjoyed some pretty good hotel experiences over the years.
However, I want to tell you about a recent experience that I won’t soon forget. It happened at the Marriott Maryville Hotel in St. Louis. A few weeks ago I was there for a two-day consulting session. Our sessions were in a small, but nicely appointed meeting room. The table was covered with a white cloth, the lighting was good, and the overall atmosphere was perfect. Throughout the time, the hotel had kept us supplied with a pitcher of cold tap water and glasses.
On our second day, I reached over for the pitcher to put water in my glass. As I began to pour, I noticed there was something stuck to the spout of the pitcher. It was gross. My host was mortified and immediately took the pitcher to management. I wasn’t going to make a big fuss. I simply waited, expecting someone to supply us with a clean pitcher of water.
But that isn’t the way the Marriott folks did things. Instead of a fresh pitcher of tap water, a few minutes later they returned with a bucket filled with bottles of cold purified water! Wow, what delightful overkill! We were all impressed. We all left with a high impression of the hotel.
What the Marriott had done was simple: they had gone the extra mile.
Where Do We Get the “Extra Mile” Concept?
The concept of going the extra mile hails back to a first century Roman law that permitted a Roman soldier to require a citizen to carry his gear for up to one mile. Of course, the citizenry resented it. But they obeyed the law to avoid punishment. At the end of the mile the citizen was ready to dump the gear and go on with his business.
We first read of “going the extra mile” when Jesus told his followers that, “if anyone forces you to go one mile, go with them two miles.” He was instructing his followers to be willing to give more than is requested of them.
But going the extra mile doesn’t come easy. It fights against our basic nature to self-protect. However, there are a few radically successful leaders in each generation who learn that, in truth, going the extra mile is the source of their success. They have better relationships…people love them. Their teams get more accomplished. And, they find it easier to look themselves in the mirror.